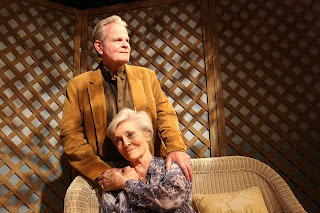 Do we ever forget our first love? The play is about Irene, an aging widow, who many years before was deeply in love with Chet, a young soldier. Because her parents disapproved of him, she turned him away, married, and got on with her life. Since her husband’s death, she and Chet have resumed the love relationship they began decades ago. This would be beautiful and fine, only there are complications. Chet’s wife is still very much alive and Irene’s daughter is angry that her mother might find comfort in the arms of any man other than her father.

The author is William Blinn, Emmy winner for Roots and Brian’s Song, who also wrote the screenplay for “Purple Rain” a personal favorite! This play was the winner at Stage 3's Festival of New Plays 2002 in Sonora, CA, where one critic said: “The drama is wrenching at times and the comedy provides just enough relief from some of the heartfelt tension.”

Starring as the passionate Irene is Lee Meriwether, former Miss America and the first Catwoman in film; Donald Moss is Chet, the man she cannot forget; Corinne Shor is her angry daughter, and Mary Burkin is Chet’s confused wife. The cast also includes Greg Lewis as a cheery neighbor, Nick McDow, and George Tovar. Directed by John Gallogly, produced by Charlie Mount, with sets by Jeff Rack and lighting by Yancey Dunhan.