THE LAST DAYS OF JUDAS ISCARIOT …in Hollywood 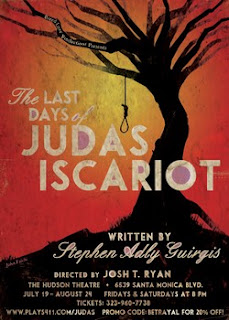 Set in Purgatory, Judas is on trial in a modern courtroom where his guilt or innocence is defended by a series of absurdist historical characters. Author Stephen Adly Guirgis has said that at age 8, in Catholic school, he first learned of Judas' condemnation, and thought, “If I can forgive someone, why can't God, who was supposed to be all loving?” Here is his answer, because this drama is about forgiveness as personified by the legendary Jesus.

Here is a brilliant play that, in the beginning, is almost engulfed by vulgarity but, once the action settles down, we experience a fascinating drama. Witnesses include Mother Teresa, Sigmund Freud, Pontius Pilate, Caiaphas The Elder, even Satan himself. The surprise guest is Jesus and, in his confrontation with Judas, the author shows the true quality of his vision - Jesus forgives but can Judas ever forgive himself?

Robert Walters, as Judas, upholds the gravity of the play by the power of his silent despair. Also outstanding are John Szura as Caiaphas, Dee Smith as Judas’ grieving mother, John Dana Kenning as Saint Peter, Sarah Ruth Ryan as the defense attorney, Keedar Whittle as Pontius Pilate and Marc Erickson as Satan. Cooper Daniels, as Jesus, beautifully expresses the true meaning of unconditional love.

The direction by Josh T. Ryan is dynamic, the stark set is superbly enhanced by Annie Terazzo’s huge trash portraits and imaginative costumes are by Jenise Smith Thornhill.

Produced by Dee Smith for Breedlove Productions. At the Hudson Mainstage Theater, 6539 Santa Monica Blvd., Los Angeles, through August.  For tickets, call (323) 960-7738 or go to www.plays411.com/judas.

Note: Originally produced in 2005, at New York’s Public Theater, by the LAByrinth Theater Company, and directed by Phillip Seymour Hoffman, the development and rehearsal process of the original run is chronicled in the book “A Jesuit Off-Broadway” by the production’s religious consultant, Father James Martin.
Posted by THEATRE SPOKEN HERE by Morna Murphy Martell at 10:06 PM