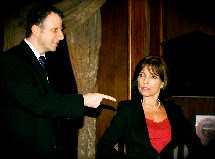 This world premiere courtroom drama, written by Arizona attorney Robert Begam and prolific playwright Art Shulman, poses an intriguing dilemma. The question at trial is whether Dr. Rebecca, by putting her patient into a cryonic state, was actually guilty of murder? What is really on trial is Cryonics – the freezing of a terminally ill patient in order to revive them when a cure is found for their illness. Is it a life-saving miracle or science fiction?
At each performance, audience members are chosen at random to be jurors and the final verdict will be different at every show. As one who always enjoys jury duty, it was a pleasure to sit in on this trial even though, in the end, I disagreed with the verdict.
Excellent performances by Diane Linder as the accused, Randy Vasquez as her attorney, Jerry Weil as the prosecutor, Diane Frank as the victim’s mother, Henry Holden as the Judge, Kevin Masterson as a pompous preacher and Joyce B. Ferrer as an assistant DA. Impressive in double roles as witnesses, are Dominick Morra, Duane Taniguchi, Skip Pipo, Ellen Bienenfeld and Mindee De Lacey. Steve Shaw does admirable double duty as the Bailiff & sound designer.
Rick Walters’ dramatic direction gives theatrical life to the courtroom atmosphere; the set by Group Rep. designer Chris Winfield, makes great use of the small space, and the costumes by Emily Doyle well fit the subject.
At Theatrecraft Playhouse, 7445A, Sunset Blvd. & Gardner, Los Angeles, through September 1. Reservations: 818-465-3213 or Tickets: www.rebeccasgamble.com.
Reviewed in the August issue of NOT BORN YESTERDAY.
Posted by THEATRE SPOKEN HERE by Morna Murphy Martell at 5:05 AM