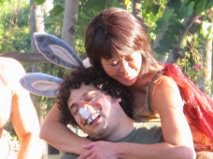 This energetic young company does Shakespeare proud and even sans microphones, are able to reach the ears of their Plummer Park fans. 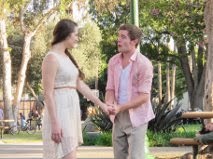 Having directed the play numerous times, it was great fun to sit back in a lounge chair and experience the delightful clashes between the various groups lost in the Forest of Athens. I especially loved the girls - Hermia and Helena (Marina Moore and MJ Beyer) who go from bosom buddies to hair-pulling enemies while fighting over - yes, you guessed it - boyfriends. 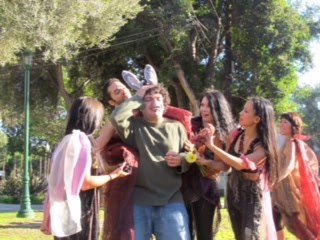 The hard-handed mechanics were a motley bunch who delighted the local kids with their madcap melodrama with Bottom (Rolando Martinez) as the star turn. 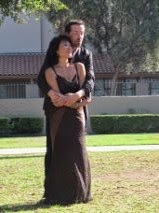 True to tradition, Duke Theseus and Queen Hippolyta doubled as Oberon and Titania (Joshua Thomas and Charline Su) to magical effect. One of the Bard's most memorable imps, Puck, is deftly played by Nicholas McDonald. The lover-boys, Demetrius and Lysander (Tyler Fromson and Ross Baker) are both adorable.

Produced by Charline Su with lively direction by Michael Matthys.  Costuming conceived by Ms. Su, (some of which were originally worn in the Kevin Costner epic film "Waterworld."). Brought to you by Lovers and Madmen Productions and sponsored by the City of West Hollywood. Three more free performances. 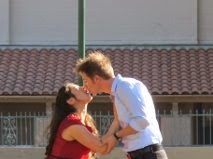 Photos by S. J. Harker
Posted by THEATRE SPOKEN HERE by Morna Murphy Martell at 10:25 AM