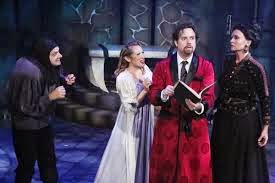 Just in time for Halloween, the Monster is back, but younger and sweeter – or is he? The grandson of the late Dr. Frankenstein who created the original monster, now a science professor in the US, is called home to Transylvania on family business.In no time he is inspired to create a monster of his own, but this time the brain will be from a great scientist. Right! 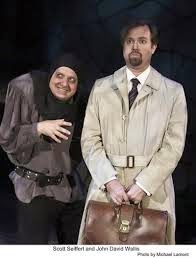 But the foolish prof sends his faithful Igor to collect the specimen. Need I say more? Just that, in spite of all the efforts to scare you, you’ll be laughing instead. All right, maybe you already know all this because you saw the 1974 movie, but I didn’t, so there! 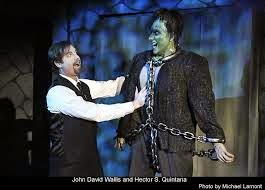 Leading the fabulous cast are John David Wallis as Young Dr. Frankenstein; Hector S. Quintana as his Monster; Scott Seiffert as Igor, and Michelle Holmes as Frau Blucher in the castle. 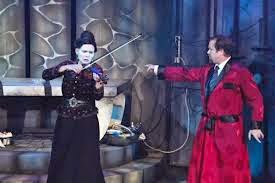 Not to be overlooked are Toni Smith as his socialite-diva fiancé;  Susan Huckle as Inga his curvy assistant; Bobby Reed as the Hermit and a squeamish patient; Dan Spector as handy-capped Inspector Kemp, and Bradley Kuykendall as the ghost of the first Dr. F. 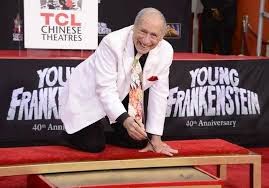 The always hilarious songs are by Mel Brooks, who crafted the libretto with Thomas Meehan, based on the original Oscar-nominated screenplay he wrote with Gene Wilder.

The show is directed with panache by Marco Gomez, and imaginatively choreographed by Angela Todaro.

At the MET Theatre, 1089 N. Oxford Avenue, Hollywood. $6 Parking at 5250 Santa Monica Blvd. For reservations (323) 802-4990 or www.domatheatre.com.
Photos by Michael Lamont.
Also reviewed in the November issue of NOT BORN YESTERDAY.